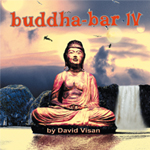 At the age of 25, David VISAN signs his first track-listing on the now famous collection of the Buddha-Bar. These albums which are sonorous snapshots of one of the most valued venues of the capital, have become in a few years’ time, the recognition sign of a tribe of faithful people with ears wide open on the world. In the lineage of its predecessors, this fourth volume offers two slices with a strong temper ( dinner and drink ). Like a ship sailing on the most immense continent, this new cruise never casts anchor permanently. « when i am on the turntables, i like my mix to tell a story, describe a journey. I choose the tracks according to that », explains the man who, through contact with Claude Challe, succeeded in developing his taste for musical globetrotting. « As a dj, i listen to many different kinds of music, ranging from ancestral world music to modern electronic compositions. It is from this boiling magma that i draw the raw materials for my mixes. For the compilations, i carry out an additional operation of skimming, i distil my programming, and i keep only the nectar », he adds.

Therefore, we keep up with him with interest during his travels in two cds, in which he meets Nitin Sawhney, Llorca, The Gotan Project, Amr Diab or Celia Cruz for the most well-known, and through which he makes us discover the Asian beat of Panjabi Mc, the sunny Zagoraki Mou of the Greek Angie Samiou, the captivating desert dancer of Nickodemus or the breath of the doudouk (the Armenian Oboe ) of Djivan Gasparyan, on the distant lands of Armen Chakmakian, just to cite these examples. An eloquent detail revealing the musical open-mindedness of the individual, he chose the abbey road studios, which are so mythical and very typical of london, for the mastering of this fourth volume.
Being a confirmed musician, he studied two years at the music institute of Los Angeles, and a year in London, David Visan Sometimes deserts His Dj’s mixing table to tease the more imposing ones of recording studios. He slipped one of his tracks on the album chill-out in Paris of which he is the selector (the second volume is being prepared). On Buddha-Bar iv, he signs two tracks, opium in collaboration with Julien Leca, under the fictitious name jade or, and Irish coffee with Carlos Campos, dj of the Barrio Latino in paris