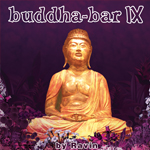 Placed under the sign of England, in a springtime kind of mood, the new George v Records compilation should yet again get stuck to people’s minds.
Why England? Firstly, it is widely recognized as « the » music country by excellence, but also and more importantly because September 2007 will see the opening of a Buddha-Bar in London, two steps away from the infamous waterloo bridge.
Why springtime? A breathtaking, fresh and sun kissed selection, with surprising titles coming from places like Greece and eastern European countries, but also from Australia, announcing a renewal in the lounge music world.
Buddha-Bar ix should follow in the footsteps of its predecessors, remaining as light and groundbreaking as ever, with exclusive and outstanding tracks that will definitely become genre references. We could mention the amazing title of  Koop « Koop island blues », but also Hess is more with « yes boss ». We also have to quote the first compiled production of Ravin…
Fasten your seat belt !